Over the past five years, alternative finance has become a fundamental source of growth capital for Britain’s bustling community of scale-ups. By offering flexible, rapid and responsive services, alternative finance offers SMEs an opportunity to overcome stringent regulations which hinder their future growth prospects.

In October, a Parliament report into business access to finance found that venture capital schemes encouraging private investment into SMEs – such as the Enterprise Investment Scheme – were vital in supporting Britain’s long-term entrepreneurship. Chancellor Hammond’s commitment of £400 million in venture capital funds through the British Business Bank (BBB) as part of the 2016 Autumn Statement is a positive step forward for scaling companies. The measure reflects a government that recognises the undeniable significance that private capital serves for growth.

In the space of four years, WeSwap has transformed from a concept into fully-fledged scale-up. Its revolutionary service has made WeSwap a leading figure in London’s globally renowned fintech scene. Since 2014, IW Capital has been a proud supporter of the company, leading the Series A funding round and supporting the CEO Jared Jesner through various stages of significant progression and growth. In the last year, the company has reported growth of 204% in the last year, with a user base totalling over 200,000.

To celebrate the success of WeSwap, IW Capital has released a comprehensive infographic profiling WeSwap. 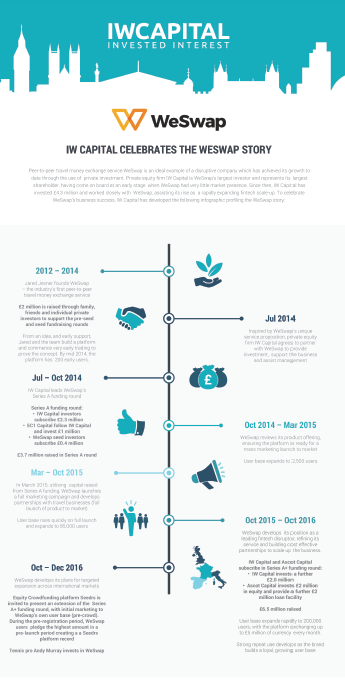